Narrow your results by:

Fonds consists of postcards and a photograph of places in the Thousand Islands. Three images are from Lake Placid, New York.

Item consists of one letter from Andrew Cornwall to his brother Charles regarding various business transactions.

Fonds consists of store records and ledgers, receipts, tax forms, school and record books, correspondence, clippings and photographs relating to the life and business of the Darling family in the Thousand Islands region.
There are also several small items of historical interest, including a primitive treadle sewing machine and a hand operated vacuum cleaner.

Accrual received Aug 20, 2015, consists of:
– mounted photo of the students of Seeley’s Bay Continuation School for 1936, no names.– school report cards for Eldon McAlonan 1936 and 1940. – mounted photo of Joe McAlonan (left) and another man operating a butter worker in the old cheese factory. Photo by Gilbert, Seeley’s Bay.– 2 snapshots of the old McAlonan cheese factory + 1 of 2 man leaning against a pickup truck by the loading dock of the cheese factory. – photo of the McAlonan house on Main St Seeley’s Bay. – photo of a man in a suit standing on a country road with farm buildings in the distance. – photo of the front of a garage with the name G E Graham over the door, signs advertising White Rose motor oil and a poster for James Auld. – photo of the Gill Rapids Cheese Factory on Seabrook Rd. – photo of a huge log on sleighs pulled by a team of horses in front of the Dr Young house in Seeley’s Bay, inscription “Gordon Kenny driver”. – partial post card showing the Seeley’s Bay Hockey team of 1931-32. – small photo of the 3 silver trophies won by Seeley’s Bay Hockey Team in 1930 including the Stewart Cup, Gray Cup, and one other. – letter written on letterhead from Rideau Lake Inn, Seeley’s bay, by Bob Coleman, to his son Jack, about going into the army, Aug 1944. – Christmas card from Rev and Mrs. J A Wadell, The parsonage, Seeley’s bay 1917. – certificate of confirmation of Ellen Francis McAlonan, May 1916, at St Peter’s Church, Seeley’s Bay 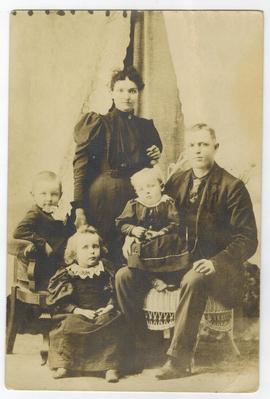 File consists of various bills and receipts from local businesses.

Item consists of a ledger from a cheese factory entitled Lansdowne Dairy Association for year 1937. Mary A. Slack, Sec. Treas. 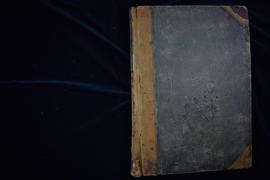 Consists of 141 digital images of the ledger, each showing two pages of the Ledger, plus 7 additional digital images of loose pages inserted into the ledger. The Ledger lists all items imported and exported through the Port of Rockport, including a description of the goods, the importer, the conveyance used, the original port.